Are You Selling Paradise or Parking Lots? Why Ad Campaigns Veer Off-Course 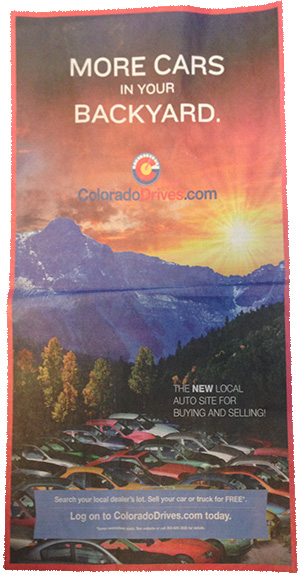 I have scratched my head over more than a couple of ad campaigns. Anyone else remember the ill-advised McDonalds radio spots that featured a South American baseball player asking, “Did somebody say McDonalds?” in an accent thick enough that I wasn’t sure.

Well, add one to my list: the print ads for ColoradoDrives.com. The first time I saw the copy, “More CARS in Your BACKYARD,” I squirmed. Blame my southern upbringing, but I instantly pictured rusty hulks set up on blocks. Why would anyone want MORE of that?

No matter. The good folks at ColoradoDrives.com remain hopeful that someone does. And their most recent ad really knocks it out of the park. They added a scenic photo of a mountain sunset, presumably meant to represent “my” backyard. Could have been a good idea, except that they continued down the path of literality. Yep, they pasted a second photo, of a sea of vehicles, in the foreground. (I hope it’s photo trickery, anyway.)  And again, maybe it’s me, but all I can think of is The Pretenders’ lament that we have “paved paradise to put up a parking lot.” Remember, Colorado is populated by with folks who love the outdoors and would rather hike or bike than drive any day.

This ad needs a make-over, starting with the value proposition. As a website for buying and selling local vehicles, ColoradoDrives.com offers users variety, convenience, 24/7 access – and the headline should reflect this. For example, “Thousands of Cars A Click Away”  tells more of the story. Or you could have fun with this, too – playing with ideas such as “driving your mouse to your next car” or the vehicles being “parked” in an “online lot.”  The accompanying image could definitely be punched up to reflect one of these ideas, or it could simply show a single car – maybe topped with a bike rack – heading into that beautiful mountain sunset.

Remember that words are powerful, but they are also slippery. With images, the stakes can go even higher.  And if you doubt that, visit the Museum of Bad Art to see how terribly wrong well-intentioned, poorly executed imagery can go.